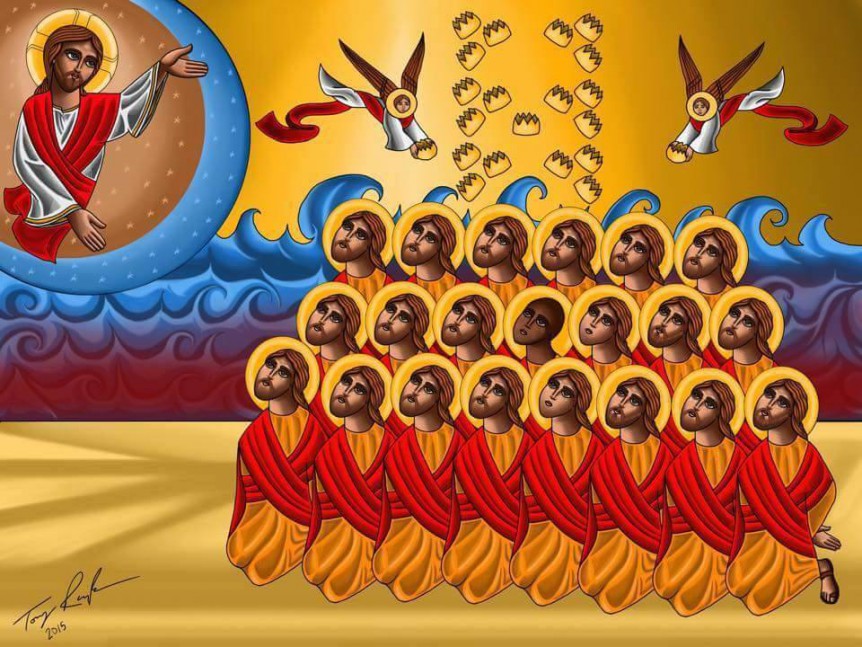 ​We received through Facebook and Satellite channels on Sunday, February 15th, 2015, a documented martyrdom of our Coptic youth in Libya that was aired through a horrifying and shocking video. They are, without exaggeration, martyrs for the sake of their faith, for they were kidnapped and then killed solely for being Christians, and if they had succumbed to the pressure and the threats and had pronounced their conversion to Islam, then they wouldn’t have killed them, but they paid their lives, a price for their faith, and it is befitting for us to be proud of them and to honor them for they became among the martyrs of the church. And what confirms that they are martyrs is that they didn’t get killed immediately upon being captured kidnapping, but their captors had plenty of time during the capture to bribe them to change their faith, and therefore there was ample opportunity for these youth to abandon their faith and their beliefs, in exchange for their lives.

​In observation, we should be in praise of them and bowing down in front of them, for not a single one of them became a coward and denied his faith, and not even in the face of the most horrific forms of mental and emotional distress, and the threats of horrific, barbaric killings. The video revealed to us how they appeared as true valiant men, strong until the last moment, and lifting their voices, beseeched God at the moment of their killings, “My Lord Jesus”. We are honored by them, as with all martyrs in all such incidents of martyrdom, and the only difference is that this time, we were provided a video depicting their martyrdom to witness, and even though the scene was painful, and even though it shocked all who saw it, it provides a valuable documentation with both sound and picture, of their martyrdom and their stronghold of the faith to the last breath. For we learn about the lives of martyrs from books and written documents, and stories of the eye witness accounts of their last moments, and some of the pictures and icons our church has are a form of documentation of the martyrs, however, this video is a live document of our youth that kept their precious faith until the last moment, and their cries out to Jesus Christ before they breathed their last breaths.

​Our deepest condolences to their families that were distraught upon hearing the news of their captured kidnapping, which left them swinging between hope and despair in regard to the future of their children, until they were shocked today finally with the news of their martyrdom. And although they are in great shock and sadness, and have feelings of helplessness and severe pain, but they shortly will come to understand and accept that no matter how high their children would have rose in life, or profited or married or begot children, or became well known and famous, that all that would not have equated what has gained them by their martyrdom in glory, eternal life, honorable reputation, and an ideal rare example of the perseverance of faith until the last breath. We offer condolences for them to Egypt, and all Egyptians, Muslims and Christians, and offer thanks to the humane president that proclaimed today a mourning period of 7 days for Egypt’s martyrs. For their martyrdom shall bring many souls to Christ, for the blood of martyrs is seed to the faith, and every martyr that falls, strengthens and refreshes the church and strengthens the faith of those who remain, especially the weak in faith, and the scene of those martyrs shall remain a source of condolence, comfort and encouragement to all.

​We pray for those who killed them so that God may open their eyes, and may they abandon their evilness, and place mercy in their hearts. And we pray for our sister Libya and for our Egyptian brothers there until their safe return.