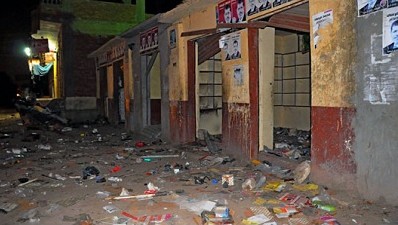 Over the past week, many Coptic families in Dahshur, Giza, Egypt have suffered physical violence and political injustice as they were forced to leave their homes because of sectarian violence.

The strife began because of an argument between a Coptic ironer and his disgruntled Muslim customer that escalated to the level of the entire town. Over 120 Coptic Christian families were forcibly expelled while security forces stood by and watched Muslim aggressors loot and burn their properties. In addition, the Coptic Orthodox Church of St. George in the area was damaged and under constant threat of destruction.

Above all, we encourage Copts to pray for our brethren, but for those that would like to offer additional help and resources, the Diocese is collecting funds for these families through Santa Verena Charity. Any donation in any amount would greatly help these families. Those that want to take the blessing may donate online via www.santaverena.org. Alternatively, they may send a check to:

We pray that the Lord will protect His children in Dahshur and comfort all those who are in distress.